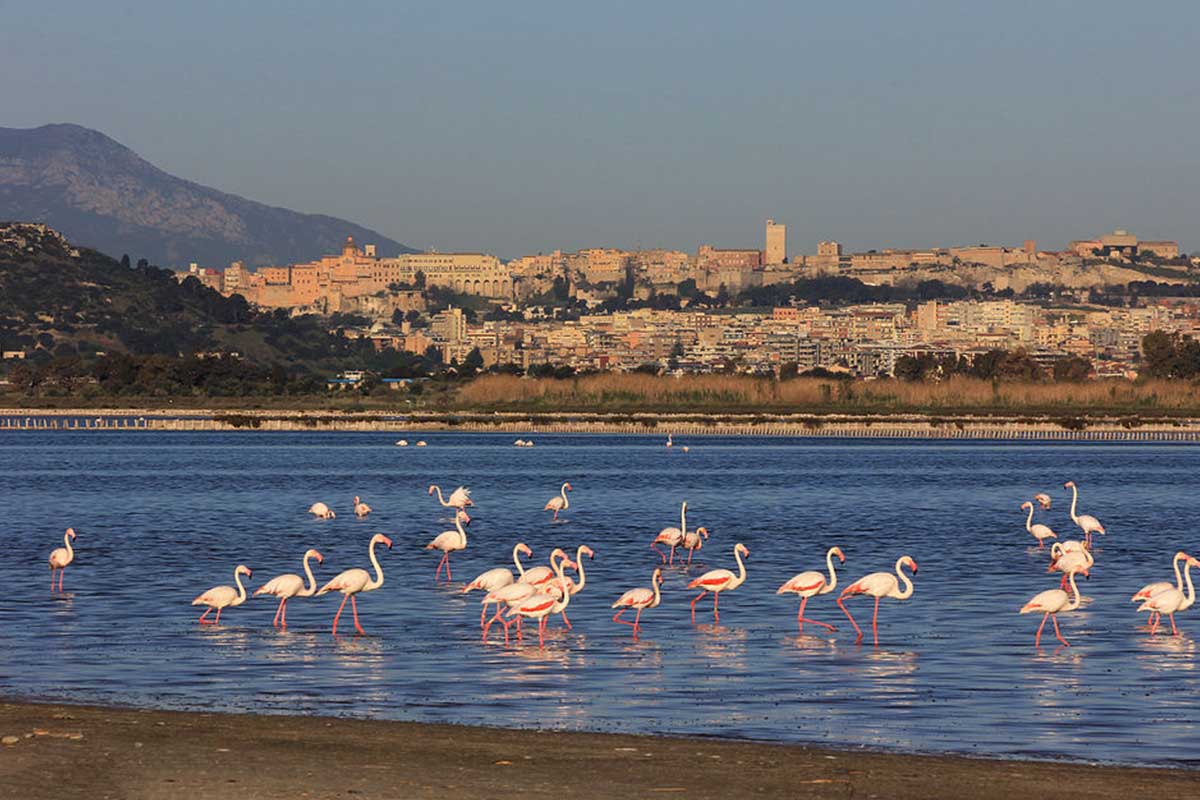 WHAT TO SEE IN CAGLIARI: THE POND OF MOLENTARGIUS

The Pond of Molentagius is enclosed between Cagliari and the city of Quartu S.Elena which join each other on your left. The large strip of land on the right is called “Is Arenas” which means “the sands” in Sardinian language. It is in fact an area formed by marine sand, a fossil beach which once was the coast line.

The salting basins of the former National Salt works are divided in several basins with artificial embankments.

Water has a different color in each basin, usually a color verging on red, this is due to microorganisms as for example Dunaniella salina, a unicellular seaweed , typically found in highly salted waters which produces beta carotene, an organic compound with a typical red color. The first written proof regarding the salt works dates back to 150 BC, from then on they have had a very important role in the course of history of the city, particularly during the Roman and the Giudical periods. In the next centuries the Pisans, the Aragons, the Spaniards (who introduced the Royal monopoly on salt) and Piedmontese continued exploiting the salt works as it was one of the main profits for the state revenue. The industrial plant you see today goes back to the 1920’s and worked until 1985. The area which includes the ponds and the strip of Is Arenas forms the Regional Natural Park of Molentargius salt works (Parco naturale di Molentargius).

The basins are connected by a complex water line built for the collection of salt. Even though the salt works are not operative now days water is kept circulating to safeguard the ecosystem.

Sea water is pumped to the farthest end of the pond and poured into the basins.

The salt water starts evaporating in the largest basin and passed to the smaller ones where the process continues up to the collection of salt.

The other canals make sure that sweet water reaches saltwater basins and drain the excess water to the port. They were also used as waterways to transport salt to the ships.

This pond is a complex area.

The presence of two different habitats in such a small area has given the opportunity to a large number of birds to live in the same place. The park of Molentargius hosts a great number of species of birds in a small area: 230 species have been assessed here.

The areas near the banks where the water is shallow are the most popular, there they can easily find food and shelter where to hide. Certainly you will see the little egret. They are very common and very visible. They are small herons of about sixty centimeters, with white plumage and a black pointed beak. On their head they have a distinctive white tuft. Their claws are light blue and yellow and the neck is usually bent in an S shape. Little egrets are predators, they catch fish and amphibians by hitting them very quickly with their beak. Their neck is bent in flight and this is why they look very different when they are on land.

If you look closely along the banks you will be able to see a specimen of Cavaliere D’Italia, a black winged stilt. They are white with black wings, long black bill and long legs. Adults are 30 cm long.

Contact us to visit the pond of Molentargius and the salting basis with one of our Cagliari tours.